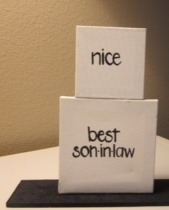 rds are sacred. They deserve respect. If you get the right ones, in the right order, you can nudge the world a little.
–Tom Stoppard

I am a writer. Words are important to me. I subscribe to the conceit that words can – and do – change the world. Sometimes they do this one op-ed at a time. Or one Facebook post at a time. In our literate culture, we sometimes throw words around and squander their influence. (It’s like spending your money on a bangle bracelet instead of a Heifer Project goat.) We toss them at each other, hurl them at those we argue with, whisper them to those we love, persuade those who disagree. They are valuable capital, but there is no high school class or online course in “Word Economics 101.”

There is, however, a Sanskrit term, “Matrika Shakti.” It means “The power in the word.” It is the basis for using a mantra. It is also a description of the energy contained within a given word. If you throw a racial slur at someone, you can be attacked or arrested – powerful word. If you take a slur and reclaim it by using it as your own descriptor – think “queer” or “bitch” – then suddenly it loses power because you own it and claim it. A single word captures all the energy and momentum of everything it evokes, and everyone who has ever used it. Think, “forgiveness.” Think, “widow.” Think, “embrace.” Words are killers and healers. They serve warriors and cowards. Sometimes it is by sheer number that they work their magic, as when thousands of people write to a legislator. Sometimes it is a single person saying the exact right combination at the exact right time. “I Have a Dream.” Sometimes it is the comfort of a familiar progression of words, “Once upon a time…”

If I needed a reminder of the power that a word can possess, it came to me recently with the death of a colleague. I didn’t know him well, but I loved running into him in the elevator or the break room. He was a kind man, and everything about him said, “safe.” He was friendly and smart. His job was in IT, and he gently helped many coworkers disentangle themselves from some computer mess or frustration. Even people who didn’t know his name knew he was a dear soul. It was a great shock to learn that he had died. The loss reverberated through our county agency. “John died, did you hear?” Many of us had not realized how ill he was.

But here is the good news: John did not die without knowing the magic of the matrika shakti. John spent his last days on a path paved with love and caring, and in the sure knowledge that he was seen and adored. And all it took was a word. One. Single. Word. Here’s how.

When it became clear to John’s wife, Sheryl, that his illness was gaining ground, she wanted him to know that he was an unusual man. Not just “special” to her, but a truly unusual person. She knew he must have had a huge impact on his friends and co-workers. She also knew that, being an “incredibly humble” man, he would probably be clueless about that impact. So she sent out a note.

John had friends at work. And, as a guide-dog trainer, many friends in the guide-dog community. There were family members and neighbors. She sent her request to all of them, and she encouraged people to forward the note to anyone who knew John. She wanted to give him the gift of knowing how people saw him. And, she told me, it turned into a “much, much bigger gift than I could have realized.”

She didn’t want people to be intimidated by a ‘writing assignment,’ so she asked each of them to send her one word that described John. She knew that if she asked for just one word, people would be more likely to respond.

And she was right. The words started pouring in. Not surprisingly, some people used the same word in their response. Sheryl started a list. As more one-word emails arrived, she grouped the words into clusters. She gathered and sorted. She and a friend painted them on little canvas squares, which she glued to wooden blocks.

One night while John slept, she put the words on shelves and counters all over the house. They were everywhere. When he woke up, she invited him to take a walk with her. Puzzled, he let her lead him around their living room and his office. She held his hand and explained that she had requested words from his friends and colleagues. They walked around the house and she read the words out loud. (Part of matrika shakti is the vibration of the sound the word makes. She made these sounds and let him hear the words people used for his impact on them.) He was overwhelmed. She was overwhelmed. They cried. They paused. They walked some more. They read some more.

John had a hard time taking it in. He couldn’t accept it at first. He kept shaking his head. Sheryl walked him around the house many times in the next weeks. Slowly, it began to soak in.

What he came to understand was that you didn’t have to live a “big life” to have tremendous impact. That being your compassionate self was enough. In fact, it was everything.

Sheryl told me that the words from his co-workers had had the greatest effect on him. He had no idea how much they cherished and appreciated him. As time went on, and it was clear that his illness was getting the upper hand, friends would call him to chat. Many times the conversation began with them telling him what word they had sent. Then they would tell him why. That word was not just an offering to him; it was the portal for staying connected, and for helping him know how much he mattered. It was the content through which they could continue to tell him that he was loved.

Sheryl and John had many, many talks about the words that were displayed in their home. She wanted him to realize, at the deepest level, that his time on the planet had been well spent. That he was a gifted and gifting person. During one of those conversations, John turned the words back into a gift for Sheryl. He said, “I hope they know that, if I am any of these things, I am that way because of you.” And she took that in.

John lived long enough to see his daughter married — more magical words that sang to his heart.  This was a joy to him, among the many joys he found as time ran short and as pain increased. In the end, Sheryl brought all the little canvasses to John’s hospital room, so he could be surrounded by reminders of how people saw him. She knew it was a source of deep comfort and happiness for him. And for her. And that he “got it” about being a meaningful presence in each of those lives.

She kept all the words. They are still in John’s office, where she visits them and remembers how pleased he was to have them all around him. They are both a memory and a way forward. She can remind herself that not only was John so known and loved, but that he died knowing so.

Knowing John’s story is a gift to me.  I think more, now, about the words I use.  I think about how I describe people — both in my thoughts and to others.  I pay attention to what I say out loud.  I understand in a permeating way that there is power in a word. Real power. Healing or injury. And that every now and then the power is magic, and that we are all mag

The matrika shakti is our wand. How shall we use it’s energy?